Several more Qatar Racing two-year-olds have been named, including a pair of exciting fillies by Galileo…

The 12-year-old Shamardal mare Question Times has already produced three Stakes winners – including Gr.1 Irish Derby winner Latrobe and Gr.1 Oaks runner-up Pink Dogwood (both by Camelot) – and we are hoping her stunning daughter by Galileo is another. She was bought by David Redvers for 800,000gns at last October’s Tattersalls Book 1 Yearling Sale. She has now been named FUTURE and goes into training with John Gosden.

Also going into training in Newmarket are two juveniles with David Simcock. Another daughter of Galileo filly we have named is the filly out of Kodiac mare Terror, who many of you will remember won a Listed race as a two-year-old for Qatar Racing and David Simcock as well as finished fourth in the Gr.1 Cheveley Park Stakes. This gorgeous filly was also purchased at the Book 1 Sale, for 550,000gns, and we have called her TERRIFY (pictured). 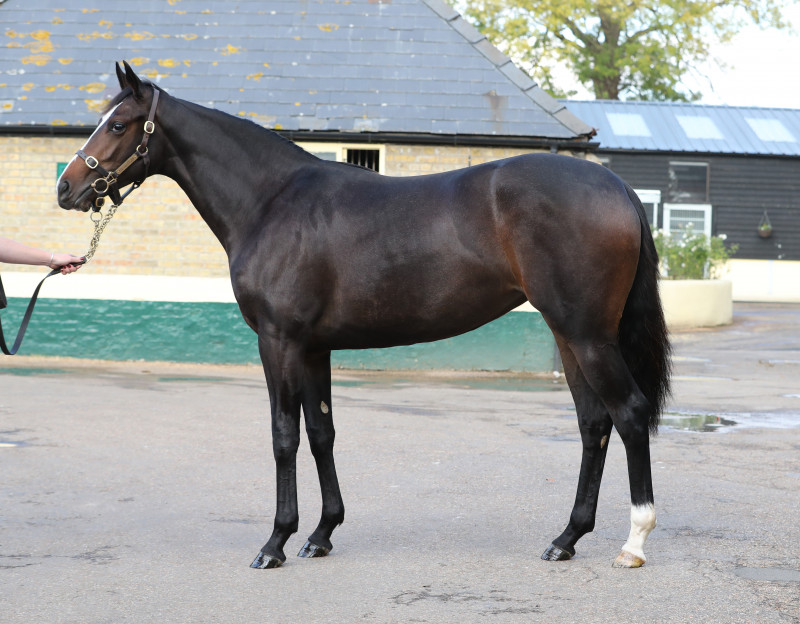 Terrify as a yearling - she's now in training with David Simcock

The other recently named youngster going into Trillium Place Stables is a colt by Kodiac we have called UNDERCOVER AGENT. He is a half-brother to French 1,000 Guineas heroine Elusive Wave and was picked up for €125,000 at the Goffs Orby Sale. His trainer describes him as “a very straightforward colt with a great attitude – he has taken everything in his stride.”

Joining those three two-year-olds in British racing’s headquarters – as well as some of those we mentioned in our previous news article – is OCEAN ROAD who, as her name suggests, is by Australia. She is out of Theatrical mare Love And Laughter which makes her a half-sister to Gr.1 placed globetrotter Wigmore Hall, as well as Long Haired Lover who, like Ocean Road, was bought by David Redvers and made a promising debut on her sole start at two last year. Ocean Road is in training with Hugo Palmer.

Andrew Balding obviously trained Kameko to win a Gr.1 at two in 2019 and hopefully he has another high-class youngster or two amongst his Qatar Racing allocation this year. Perhaps one could be MARINE who is a Sea The Stars colt. Naturally, he hasn’t done much at home yet but his trainer is already a fan, describing him as “a great mover and very straightforward”. 400,000-euro buy Marine is out of Ignis Way (a half-sister to multiple Gr.1 winner Danedream) and thus closely related to our own Heart Reef, a debut winner at two last year and likely to excel over middle-distances this time around.

Lastly, but by no means least, Heart Reef's trainer Ralph Beckett has a strong filly by Tweenhills sire Charm Spirit called TIME SCALE. Being out of An Ghalanta means she’s a half-sister to Bletchley, who Ralph trained to finish a very close second in the Gr.3 Albany Stakes at Royal Ascot for us, and early reports suggest Time Scale knows her job. An Ghalanta is also at Tweenhills and produced a colt by Roaring Lion in January.

Know It All retired and visits Kameko

Unfortunately, we must announce the retirement of Gr.1-placed, Gr.3-winning homebred Know It All. Sh…